How to Find Me

Crossing the Line: A Novel 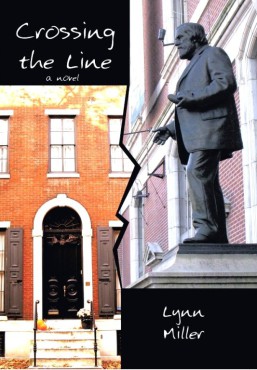 Crossing the Line is a story of gay lives in Philadelphia over the course of a century-and-a-half. In the first years of the 21st century, Owen Gilroy retires from his career as a banker. Soon after, he begins to investigate the life of his ancestor, Hiram Milhouse, who was one of America's leading scientists in the 19th century and an early disciple of Darwin. Meanwhile, Owen begins to play a greater role in the life of his teen-aged grandson, Sam, when Sam's mother, Owen's daughter, grows concerned about the young boy's behavior.

Discoveries are triggered when Owen and his partner, Brock, buy an old house in Philadelphia that once was Hiram's. Owen is soon tested by an affair that threatens his household and nearly destroys his effort to help Sam through his coming-of-age trials. The older man's journey into the past, like his struggle to guide--then rescue--his grandson, reveals much about the changing shape of American society and gay life in our time.

The story of Owen and Sam unfolds against the backdrop of 9/11, terrorism, the Iraq War, and human cloning. Hiram's 19th-century world features a runaway slave, Darwinism, the Civil War, religion and Republicans. In the end, the secrets of the past have a profound influence on the lives of both Owen and his grandson.

Crossing the Line (2010), pp. ix-339, is available in hardcover, paperback, or electronic editions from AuthorHouse, www.authorhouse.com., through your local bookseller or prefered on-line retailer.

"I was captured quickly, drawn into the dance of the people and their lives, savoring the insights and fine writing Miller has brought to his characters, and enjoying the connections with science and history. Many times, I couldn't put the book down until a particular plot point was resolved. Miller shows excellent timing for the many 'reveals' in the drama, right up to the very end." (Martha C.)

"A fantastic, literate and spellbinding incursion into the depths of life, love, and human identity. It is so artfully . .  . written that at first it does not seem to be a novel. Then the pace accelerates and it becomes a real page turner. This compelling 'historical' study illustrates that where there is love, as always, we seem to find a way. All of us in this day and time need to read this book." (Judge B.)

"This book is delicious fun.  .  .  Mr. Miller's style reminds me of Armistead Maupin's writings: a few chuckles, a few tears, and completely fascinating.  .  .  . A great read. I am anxious for a sequel." (Bill C.)

"Like amoebas floating on a glass slide, the cast of characters from different centuries collide, combine, betray, and finally forgive one another in surprising, yet convincing ways that suggest there is more to life than mere biology.  .  .  . Crossing the Line is a sprawling tale with numerous strands, but it is above all a 'good read.' The narrative moves forward briskly with a host of interesting characters and elegant details. Like all good books, it keeps the reader engaged well beyond the final chapter." (Spike V.)

"An engrossing, beautifully written novel with a fascinating set of characters  .  .  .  What a rarity in our day: a novel of ideas! And a grown-up novel at that.  .  .  . Crossing the Line reminded me of such writers as Aldous Huxley, Louis Auchincloss, and maybe a little of John Updike, too."

"Crossing the Line is a literate joy. Lynn Miller's contrasting and blending of 19th and 21st-century Philadelphia life, its manners and mores, is both imaginative and compelling, bringing both eras to vibrant life. Once begun, this thought-provoking tale is difficult to lay aside and its characters, Victorian and modern alike, have a way of lingering in the mind days after one has finished reading." (Dan R.)

For additional reviews, click on my website's "News & Current Happenings."